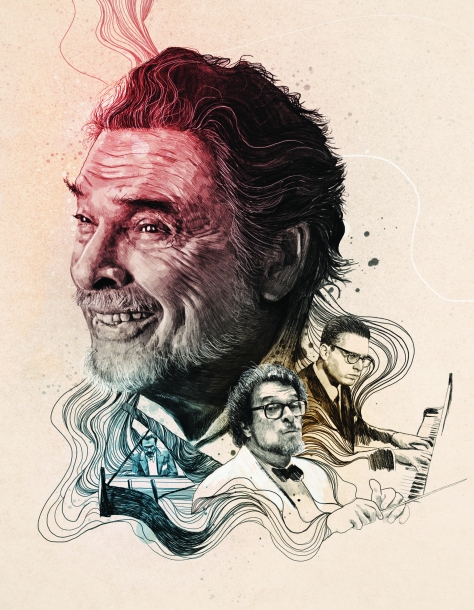 Leon Fleisher, the Peabody Institute Andrew W. Mellon Chair of Piano, is one of the most esteemed pianists and conductors of his time. His storied career began with a meteoric rise to classical music renown in the 1950s, a switch to conducting and playing a left-hand repertoire when a neurological condition robbed him of the use of his right hand in 1965, and a celebrated return to two-handed repertoire following surgery in 1981. As an artist, he occupies a rarefied air.

“He has an uncanny, absolutely eerie kind of way of basing a piece of music in a way that is new,” says vocalist Phyllis Bryn-Julson, a recently retired Peabody faculty member who has collaborated with Fleisher in the Theater Chamber Players ensemble he cofounded in Washington, D.C., in 1968, and during her tenure at the conservatory. “It’s something that he’s devised over his years of experience, and it’s not describable. He comes with a different kind of a depth and knowledge, and it’s based on fact, but it’s also based on just a really unbelievable ear for the way things can happen.”

As Fleisher approaches his 90th birthday in July, he’s also quietly inching toward a six-decade career mark as an even more rare and generous talent: as a teacher. He’s taught  at Peabody since 1959, and multiple generations of his students report that the education he provided them continues to inform not only their playing, but their relationship to the world — a constant reminder that they need to be observers and participants in the world so that they can relate to the music and convey its emotions, stories, and experiences to others.

“I loved studying with him, and I hope I was appreciative at the time because he gave me hundreds and hundreds of hours out of his private life,” says André Watts (AD ’72, Piano), who studied with Fleisher in the 1960s. “But it was only after I left from studying with Leon, when I started to teach, that I realized to what degree he gave thought and care to teaching me.”

Watts brings up the conflicting impulses that can besiege a young concert pianist who still feels like a student. “One night I would go in front of a couple thousand people and have to have the attitude, ‘You should listen to what I have to say because it’s meaningful,’ and the next day go in to him and say, ‘Help me because I don’t know anything,’” Watts says. “That feeling he understood, I think, better than I did. I don’t think I could have articulated at that time what was difficult, but he understood that very well, and he worked accordingly. That kind of interest, that kind of willingness to add effort is very, very loving.”

“He takes you beyond piano and beyond music, and applies everyday life into the playing,” says Jenny Lin (KSAS BA ’94, German; AD ’98, Piano), who studied with Fleisher in the 1990s at Peabody and at the International Piano Academy Lake Como. “He always spoke about [how] every performer is different, that there shouldn’t be one way of playing. He talks about breathing, and he talks about the cosmos. To Mr. Fleisher, the piano is a microcosm of the world and the universal force that we all share, and on which art depends to communicate. He talks about music in such a way that one can use it 10 years later, 20 years later, because one remembers that one thing he said.”

Michael Sheppard (BM ’98, MM ’00, GPD ’03, Piano) echoes that sentiment. Though he finished his GPD with Fleisher in 2003, he continues to experience moments when he feels like he newly understands something Fleisher said to him. “Sometimes you don’t
get everything he says in the moment,” Sheppard says. “I think he knows that at some level, and he’s constantly guiding you through lessons, and years later it’s amazing how an insight can just pop up and suddenly your playing is at a whole different level.”

Precisely identifying exactly what this insight is can be difficult to put into words, as what the musicians are talking about is an elusive place where their minds and bodies interact with a physical sound-making object, as instructed by notes written down on a musical staff, perhaps by somebody who died hundreds of years ago. The notes don’t change, the sound-making object, when properly cared for, doesn’t change. The performer is the variable, and yet making music isn’t as mechanical as hitting the designated right notes at the designated right time. There’s this whole, complex humanity animating the music that supplies its profound emotive power.

“It’s a difficult thing, playing the piano or any instrument, just because there is a physical manifestation of whatever you’re trying to do, and that’s your technique,” says Sahun “Sam” Hong (GPD ’15, MM ’17, Piano), one of Fleisher’s current students. “Improving your technique is important, but doing that definitely seems to distract you from the primary goal, which is making music in the first place. It’s always so difficult, because we’re not sitting here trying to improve our technique to prove something. We’re trying to improve our technique so that we can express the music more freely. Yet it still hinders the making of the music. It’s a very delicate balance.”

All musicians have to find their own ways to navigate that balance, and Fleisher sees his role as encouraging students to consider many possible ways to find their own path. “What one gleans from a piece of music as a performer who is going to perform it, we relate it to our own experience,” Fleisher says. “It is always filtered through each person’s own DNA. I think what a lot of performers are worried about is their own individuality. How can they do something that is unique to them? I think that’s a concern that really shouldn’t bother them. One of the things that one tries to communicate is an increased awareness or an openness to life, what life has to offer us, which will help color what it is that we do.”

Watts recalls the lasting benefit of this open-ended advice. “I remember he said once, ‘My job is not to make little Fleishers,’” Watts says, and adds that he would play for Fleisher, and based on what he played, Fleisher would have an understanding of how Watts approached a piece. “And he would say, ‘From my experience, maybe I can present other possibilities to you. You’re free to accept or reject any of those possibilities. Ideally, my presenting more possibilities to you will make you come up with more possibilities of your own.’

“You might think, ‘Well, yeah, doesn’t everybody do that?’” Watts continues. “No, actually. And that’s a very high level of teaching.”

It’s an approach that reminds students to focus on why they’re working so hard. “Every time I go in the studio after having worried for the whole week about my problems, thinking I feel like I can’t do this, he tells me, ‘Oh, it doesn’t matter whatever you feel like you can’t do because the audience doesn’t care,’” Hong says with a laugh. “That’s how he gets me every time. He’s reminding me I’ve forgotten to pursue higher goals in music, and always nudges me back to the primary goal.”

“He is undoubtedly one of the great musicians of our time,” says former Peabody faculty artist Rheda Becker, who has known Fleisher since 1958 and was a colleague of his during her 42 years as musical narrator at the Baltimore Symphony Orchestra, where he was the associate conductor from 1973 to 1978. In 2012 and 2014, Becker, who is also a member of the Peabody Institute Advisory Board, and her partner Robert Meyerhoff created the Leon Fleisher Scholars and the Leon Fleisher Studio Scholarship funds to support the undergraduate and graduate students studying with him. “He is also someone with a great deal of social awareness and conscience, a citizen of the world, which makes him the very treasure that he is. He looks at his legacy of teaching as an important aspect of his career.”

Fleisher learned to teach in the same room where he honed his own talents: at the Hotel Peter Stuyvesant at Central Park West and 86th Street in New York, apartment 9C. In a piano room overlooking the park, students played a Steinway, the teacher a smaller upright. The teacher only taught a handful of students, and they all sat in the piano room as the teacher worked with an individual student. The teacher was Artur Schnabel, the Austrian emigré who was one of the most revered pianists and music educators of the 20th century. Though German was Schnabel’s native tongue, Fleisher remembers his English being impeccable. “I can only describe it as he sounded like Richard Burton
with a German accent,” Fleisher recalls.

Schnabel was “part of several generations of a civilization that took language very seriously,” Fleisher says, understating a singular artistic lineage. Schnabel studied under Polish great Theodor Leschetizky, who studied with Austrian composer/pianist Carl Czerny, who, at the age of 10, became the pupil of a German composer named Beethoven. Schnabel also took teaching very seriously, and loved it. “I think he passed that on to all his students,” Fleisher says. “That’s a challenge, because when one had been subject to greatness, you had something to live up to.”

“I found his method of teaching most effective and productive,” Fleisher says of this one-on-one in a group format. “You learn not just to try to elucidate the music but you begin to tune in to what the characteristics of the student are, where their proclivities rest, and how to approach that specific student. This combination is always challenging, and we have such incredible luck to be devoting our lives to such an extraordinary field of human endeavor. It’s just a joy every time to walk into the studio.”

See more at The Peabody Archives of the Arthur Friedheim Library’s digital exhibit.