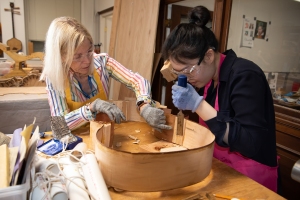 On a steamy afternoon in late June, deep in the basement of Leakin Hall, Peabody associate professor of musicology Susan Weiss is working with a student who recently completed the veteran teacher’s course on the history of musical instruments.

Weiss’ co-teacher, Nathan Scott, has given her the summer to make her own instrument, a practical component to the class that the students experience but that Weiss is unable to undertake during the months she is teaching. On this day, Weiss and Yin Zhu (MM ’19, Vocal Accompanying) are chiseling away at wood that is supporting the shape of the cello they are crafting by hand. END_OF_DOCUMENT_TOKEN_TO_BE_REPLACED

Christine Pulliam Melamed (MM ’10, Vocal Accompanying) who founded Prelude Opera in 2017 with successful production of “The Three Little Pigs,” has announced that the company will continue it’s programming of children’s opera with  “The Three Billy Goats Gruff” in 2019. In February, Melamed performed in a recital titled “Love is in the Air” incorporating works by Schumann, Brahms, Debussy, Kreisler, Gershwin and Rodgers and Hammerstein with mezzo-soprano Brittany Fowler and violinist Caroline Drexler at St. Cabrini Shrine in NYC. Melamed continues her work as a faculty member at King’s College in New York City, which she joined in 2010. As an opera coach and director, she has worked for the Atlantic Music Festival, Masterworks Festival and the Opera Company of Brooklyn. As music director of the opera company Dramma per Musica, she directed Don Giovanni, Xerxes, Giulio Cesare and Ariodante. 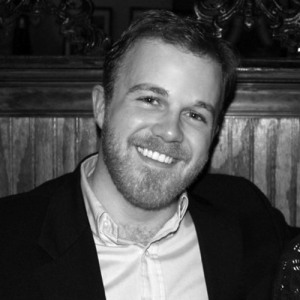 Nathan Cicero (MM ’18, Vocal Accompanying) has been appointed Music Director of Skylark Opera Theatre’s production of Così fan Tutte, which opens at the Historic Mounds Theatre in St. Paul, Minn. in late March. The production also features Laurent Kuehnl (MM ’13, Voice) as Ferrando. Since graduating from Peabody, Cicero has been appointed Assistant Director and Pianist for South Metro Chorale and Director of Music and Organist for the Church of St. Mark in St. Paul.