Two different films, currently in production, feature Peabody people with important stories to tell about making it in the world classical music.

Tuba player Richard Antoine White walks toward a park in West Baltimore. “This water fountain has to be as old as me,” he says, and is surprised to discover it still works. He chokes up a second, then says, “That was my bathroom, man,” referring to a time in his life when he was homeless.

Maestra Marin Alsop, director of the Peabody Conservatory’s graduate conduct-ing program, recalls being told that girls couldn’t lead an orchestra and that she would never succeed. “Without that sense of challenge,” she says, “I wouldn’t be the strong person that I am.”

Both of these moments take place onscreen, in footage from documentary film projects. R.A.W. Tuba is the roughly half-hour documentary that illuminates the life of White (BM ’96, Tuba), from his hard-scrabble early years in West Baltimore and on to becoming principal tubist of the New Mexico Philharmonic. Alsop’s road, from being a reluctant pianist at the young age of 4 to becoming a classically trained violinist and founder of the all-female swing band String Fever, is being explored in an ongoing project with the working title We Conduct, directed by documentary filmmaker Bernadette Wegenstein, professor of media studies and director of the Center for Advanced Media Studies at Johns Hopkins. Both films are aimed to come to a film festival or a stream-ing service sometime in the next year. 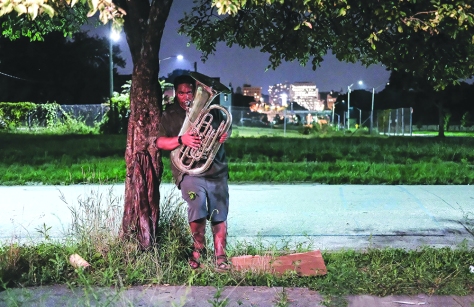 “Richard, his story is just incredible,” says Darren Durlach, who co-directed R.A.W. Tuba with his filmmaking partner David Larson. Speaking by phone in May, Durlach had recently returned from the documentary-focused Mountainfilm Festival in Telluride, Colorado, where the short debuted. “It got standing ovations each run, and you could hear a lot of sniffling and tears in the theater. Richard performed after each [screening], and it was really powerful and moving.”

White’s mother battled alcoholism, and as a kid he often couch-surfed or slept outside or in abandoned row houses. The foster parents who raised his mother eventually took him in, providing stability, and when an injury sidelined his teenage sports career, he found his way to the Baltimore School for the Arts, brass instruments, Peabody, and eventually becoming the first African-American to earn a DMA for tuba performance (from Indiana University).

A doctoral degree wasn’t originally part of his plan, but a chance encounter on Baltimore’s subway changed his mind. White was telling his dad that he wasn’t going to pursue a doctorate because he already had jobs lined up, when a nearby young man overheard him. “This little kid tugged on my shirt and said, ‘Hey, mister, you’re going to be a doctor?’” White says. “And I was, like, damn, I gotta finish this to let him know that he can do it. That’s my ultimate dream for kids in Baltimore and all over, to see this film and turn the word ‘impossible’ into ‘I’m possible.’” 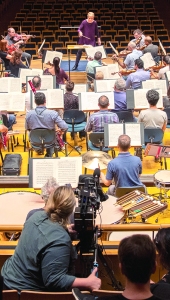 Changing the narrative about who can be a classical musician also drives the We Conduct film project, which explores an emerging diversification of who gets to be on the podium, using Alsop’s story as a vehicle. “Marin has the capacity to really take a viewer on a journey and grab them by the heart,” says Wegenstein. “At first, I came into this project because of the feminist theme, the exclusion of women to this profession, but as we started shooting, her charisma and the music took over. Sure, she’ll tell us about how hard it was for her, but we’re also going to see her through the eyes of her students, who are diverse and who have also been excluded from the canon.”

Jonathan Rush (MM ’19, Conducting) is one of those students who appears in the film. He says the classic Looney Tunes “Long-Haired Hare” cartoon, in which Bugs Bunny disguises himself as Leopold Stokowski, first made him aware of conductors when he was about 6 years old — “I would practice with my mom’s crochet needles in the mirror,” he says — but the idea of becoming one himself felt like a far-away dream.

“Being African-American, I wasn’t sure if it would ever be a reality because I wasn’t seeing many conductors who look like me,” he says. He adds that he grew up with both classical music and gospel, and that a family friend told him to stick with gospel because she didn’t want to see him fail, implying success was a longer shot in traditionally and overwhelmingly white classical music.

“So straight away I almost gave conducting up,” he says. He enrolled to study music education at Ohio State University, pursuing a path to teaching. Then a friend passed away his sophomore year, which Rush calls a wake-up call that he had to pursue his dreams. He conducted an OSU student orchestra, using the video footage to apply to Peabody, where he was mentored by Alsop.

“Working with Marin is one of the greatest things because she never lets me settle for just good enough,” he says. In 2018, Rush was named a conducting fellow with the Chicago Sinfonietta, where he will be assistant conductor for the 2019-20 season. “A lot of conductors teach their students to essentially be copies of them. Marin doesn’t look at it that way. She wants us to be our own selves while on the podium. She helps refine our skills and pushes us to dig even deeper into the music.”

Like Rush, most conductors don’t get the chance to study the craft until graduate school. The We Conduct project checks in with a few Peabody Preparatory students — in middle and high school — who are exploring conducting through a program created by Elijah Wirth (BM ’99, Tuba; MM ’02, Music Education), director of the Peabody Preparatory Wind Orchestra. The program was in full swing when one of his students, Sumaya Elkashif, took a soccer ball to the face and couldn’t play her instrument. He told her she should show up to orchestra practice anyway and try conducting, and she showed up with the score, raring to go.

In We Conduct, Wegenstein spends some time with Elkashif and Keyona Carrington, another Peabody Preparatory conducting student, including some of their interactions with Alsop, who “came to a couple of classes to watch them and gave them comments,” Wirth says. “Marin is this incredibly strong female figure in a very powerful position, [and] the effect she has on these young girls can’t be overstated. Getting to see her do what she does and being able to interact with her has had an enormous effect on these students.”

Shooting for the documentary started in 2017, with most footage shot during the long rehearsal process and performance of Leonard Bernstein’s MASS that the Peabody Institute mounted in October 2018. Alsop, Wegenstein, and her producing partner Annette Porter debuted a sizzle reel of footage in May. The roughly 10-minute cut of teaser showcases a gorgeously shot, moving documentary that explores the challenges women have faced ascending to the conductor’s podium. “I hope any girl that sees me thinks, ‘Oh yeah, that’s a viable possibility for me,’” Alsop says in voiceover.

Wegenstein spent the summer editing the footage into a cut they can submit to festivals; she aims to debut it at the Tribeca Film Festival in April 2020. “I think in the editing room is where we will give birth to the film,” she says.

Durlach understands that ethos. He first started shooting with White in May 2018, visited New Mexico over the summer, shot a bit in Baltimore with White and his local friends and relatives in the fall, and then “edited and re-edited and re-edited and re-edited from September to February,” he says. R.A.W. Tuba had a first-look screening at White’s Baltimore School for the Arts alma mater before its Mountainfilm debut. It has since screened at the San Francisco DocFest and the Columbia Film Festival, and Durlach is hoping that Netflix or Amazon Prime becomes interested in streaming it.

White simply hopes that young people who can relate to his situation get to view it.

Filmmakers Darren Dulach and David Larson with King Pinnock (on shoulders) who portrays White as a child in the film. Media credit: John Waire/Early Light Media