Two years of preparation culminated last October in a bold performance of Leonard Bernstein’s most eccentric work. It brought together 500 artists – singers, dancers, instrumentalists – in an ambitious collaboration that no one involved will soon forget. 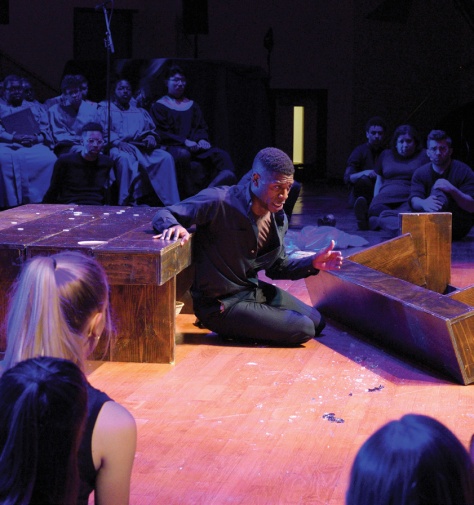 The Celebrant, portrayed by Curtis Bannister, implores his congregation to pray following an explosive loss of faith.

As concertmaster for the October 26 performance of Leonard Bernstein’s MASS — which involved more than 500 students of the Peabody Institute and Morgan State University, as well as collaborating community members — Fitzhenry knew it was her job to help lead the orchestra. She had to be aware whenever the conductor changed any tempo or dynamic and she had to help encourage all the sections to play together.

Sitting in the concertmaster’s chair also gave her a front-row seat to Alsop’s reactions during the four days of rehearsals leading up to the performance, the first time the various groups of dancers, choirs, orchestra musicians, and wind ensembles all came together. The street chorus had been rehearsing since the spring. Celebrant Curtis Bannister (GPD ’10, Voice) started working on his role over the summer. Dancers and musicians and choirs began focusing on the piece at the beginning of the fall semester. Stage blocking and movements could only be worked out once all 500-plus performers got into the concert venue — the cavernous New Psalmist Baptist Church in West Baltimore.

Fine tuning takes repetition. And when some element clicked into place, Fitzhenry saw it on Alsop’s face, such as when Bannister’s Celebrant sang the Lord’s Prayer a cappella. During rehearsals, Alsop would signal the principal cellist to play two notes during it just to remind Bannister of the pitch. “And each time she did, Bannister would be right on pitch,” Fitzhenry recalls, and laughs a bit as she mimics the look on Alsop’s face, eyebrows raising quickly, joined by a “not bad” kind of nod.

Nearly 2,500 people filled the church for the performance on a rainy Friday night, with roughly another 1,000 tuning in to the livestream online. For nearly two hours the performers brought Bernstein’s ambitious work, which uses the format of a Catholic mass to tell a story about a crisis and rebirth of faith, into scintillating life. Bernstein’s interpretation of sacred music, underscored by orchestral strings and wind instruments, is interspersed with songs hewing closer to the popular music of rock, folk, and musical theater. A marching band streams down the aisles and onto the stage. A street chorus leads a minor revolt in the church until members of the orchestra, choir, and even the audience are singing in the aisles.

Members of the Peabody Preparatory Wind Orchestra march across a full stage of singers.

This unforgettable spectacle — part of the worldwide 2018 celebration to honor Bernstein’s 100th birthday — involved nearly two years of planning, months of individual and ensemble rehearsing, and many hours of run-throughs to bring so many moving parts into a tautly choreographed concert event. While the concert sears itself into a concertgoer’s memory, for the student performers, everything that went into preparing for that night leaves just as indelible an experience. 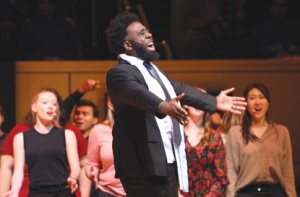 Trumpeter Hana Harwood recalls the “cool” feeling of hearing how a marching band could gel with an orchestra. Dancer Constance Ui-Seng François recollects not understanding the whole story of MASS until all the ensembles were brought together for the final week of rehearsals. Soprano Micaela Stewart evokes the visceral sensation of different choirs coming together as one. Vocalist Daniel Sampson remembers feeling genuinely chastised by a 13-year-old. And that teenager, singer Hayden Spitzer, recalls being surprised by the force of the sound produced by the street chorus the first time he heard it.

All of these little details paint a portrait of all the work that goes into taking a big creative risk — and sticking the landing.

“The first time we walked into that church I looked around and thought, Wow, this place is huge,” says Harwood, a high-school senior, Peabody Preparatory student, and member of the Peabody Preparatory Wind Orchestra and Peabody Youth Orchestra. “It felt like this is our chance to show we’ve got what it takes to play this piece in this kind of space. It was our time to show what we’ve worked on in all of these rehearsals. We’re ready.”

Bernstein’s MASS, commissioned for the 1971 opening of the John F. Kennedy Center for the Performing Arts, is one of contemporary classical music’s rarer experiences. Broadly misunderstood, if not outright derided when it debuted, its musical and dramatic ambitions (a narrative exploration of a crisis of faith is echoed musically, climaxing in an ecstatic outburst of controlled musical chaos and theatrical splendor) make it genuinely eccentric, thematically challenging, and rarely performed as a full theatrical experience.

Bernstein mentored Alsop early in her career, and rehearsals “were about trying to get everyone to get her idea, because she knew Leonard Bernstein and worked with him,” says Sampson. “When you have such a direct line to the man himself, you’re going to want to do it justice … We wanted to do right by her, so she could do right by him.”

Sampson, a graduate student studying voice and pedagogy, auditioned for and earned his role in the Street Singers last February. The Street Singers ensemble started rehearsing that spring semester, a process that included a session where they all talked about their relationship to faith. Sampson considers himself a spiritual person, and in MASS his character sings “God Said,” a jaunty song that directly questions and pokes fun at the Celebrant’s Scripture readings. 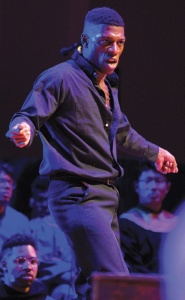 “I’m the one who is needling the Celebrant, and to develop this character I had to deny my own instincts a little bit,” Sampson says. “My character knows how the church works, and when you know how things work, you can find better ways to mess things up.”

Each of the student performers shared his or her own interpretation of what Bernstein’s MASS is about during interviews for this article, and no two readings were alike. One saw the work as a deeply spiritual journey about an individual’s relationship with Christ. Another read it as a work showing how institutions are not needed to have a relationship with God. Another felt it explored how important it is to question your faith.

First-year dance major François says the dancers dove right into rehearsing MASS on their first days of classes last fall. They learned about their role in the work, listened to the music for their sections, and started improvising ideas for choreography based on liturgical dance. Dance chair danah bella took their ideas and fleshed out choreography for each section. But it wasn’t until the final week of rehearsals that François began to understand the full scope of what they were doing.

“Seeing and hearing the choir really helped me put together what this is about,” she says. “For most of the semester we’re learning our parts — here we’re on the Celebrant’s side, now we go on to the confessional section, then we all go crazy — but seeing what the choir goes through really drove it home for me. They’re the choir, they’re supposed to be on the Celebrant’s side, but there comes a point when even they’re like, Hold up, we’ve got some questions, too. I felt the story then in a way I hadn’t yet, and I hope the audience felt that too, this sense that we’re all in this together.”

A number of students raised the alluring power of large-ensemble collaboration. “We all had our part, but learning how it fit in with everyone else’s story was the coolest part for me,” says Harwood. “In a wind ensemble, you don’t always get the chance to find your way to fit in with 500 other people. We were so used to blasting away in Friedberg Hall, because we were the only ones playing, but we had to learn how to mesh with the orchestra. And during the performance, I just felt like we were all so in sync, and it was an amazing feeling.”

Stewart, a first-year member of the Morgan State University Choir and alumna of the Peabody Children’s Chorus, says the experience taught her valuable lessons about choir singing. “When you bring a bunch of different choirs together, you meet a lot of different people, a lot of different types of singers, and that’s a lot of new voices to try to merge with,” she says. “Performing in [MASS] was a once-in-a-lifetime chance. Seeing it is a once-in-a-lifetime chance. The entire experience felt like a rare thing.”

The student musicians recognized that. They knew they were performing something that not many musicians get the opportunity to do, and they savored it.

“The two acolytes, Georgia [Pickard] and Hayden [Spitzer], had so much energy and were so much fun to work with,” singer Sampson says. He recalls how he felt the first time the entire ensemble went through the scene that immediately follows the congregation insurgence. It was a little rough. “Hayden started walking around, rolling his eyes, huffing and puffing, just this look of pure disgust on his face. And I was not prepared for that. I did not expect to be judged so harshly by these kids. I felt it.”

Spitzer says the older performers weren’t so bad, either. “I’ve never been in something like this where everyone is so strong and so good at what they do,” Spitzer says. Though the 13-year-old has done a fair amount of musical theater and television commercials, he’s newer to classical music, and he had to work extra hard to hit the higher notes with ease. “I definitely learned how to keep my composure in a situation with a lot of excitement, how to be professional and take direction and listen. I was nervous at first but once I got onstage the first time, all my nervousness went away because I knew it. I was confident with it, and it was just the best feeling.”

And the confidence that comes from aiming high and getting there requires taking big risks, such as performing a work as odd as MASS with more than 500 student musicians and community members. Sure, it took two years of planning and a perhaps insane amount of institutional coordination to get there. But the rewards? Students will take what they learned about themselves from this experience as they head into their careers. 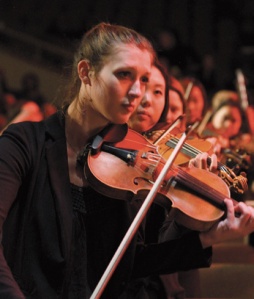 “I love the adrenaline rush of just totally going for it at a performance,” Fitzhenry says, a feeling she says was amplified by the scale of the MASS performance. “Leonard Bernstein’s daughter was there, and I said hello to her before the concert, and [I was] sitting there thinking, ‘we really need to deliver.’ That’s what we’re trained to do as classical musicians, and at Peabody I think everyone knows that come performance night, you show up. And I feel like everybody — the orchestra, the singers, the dancers — were just on fire that night and so excited to be performing this thing for everyone who came to see it.”

“It was wild to look out and see so many people in the audience,” Sampson says. “But if you’ve been studying music for this long, that’s what you want. If you’ve gotten to the place in your career where you get to work with Marin Alsop, then your goal is to sing for as many people as possible.