Please note that after the publication of this article the name of the program was changed to Sound Rounds at Johns Hopkins.

Thanks to a new initiative, student musicians are improving the quality of life for hospital patients — and developing important skills as performers.

Clad in a yellow isolation gown in a hospital room at Johns Hopkins Hospital, Peabody master’s piano student Misael Tambuwun plays Beethoven’s “Für Elise” on his keyboard. When he finishes, he leans over and asks for requests.

“How about some Mozart?” says Stephanie Battles, a kidney recipient and Tambuwun’s primary audience.

So Tambuwun launches into Mozart’s “Turkish March,” and Battles, who has just finished today’s dialysis, is all ears. She perks up in her hospital chair as the young pianist performs. Nurses come around the corner and give the thumbs-up from the hall.
Battles’ husband, Joseph McDonald, sits next to her, also enjoying the concert.

“Now I know why he [was] at Carnegie,” says Battles.

She’s referring to a recent performance at Carnegie Hall in which Tambuwun’s own composition — on flute, piano, and violin — was performed. Tambuwun has been performing at the comprehensive transplant unit of Johns Hopkins Hospital since April, playing once a week as part of the Musicians on Call pilot program. He wheels a Yamaha keyboard to rooms with patients who have requested music and plays a short program pairing pieces he’s selected with patient favorites.

This pilot program, launched with Tambuwun and double degree student in oboe and public health Sophia Lou, is one of several initiatives born of the Center for Music and Medicine, a collaboration between the Peabody Institute and Johns Hopkins Medicine that aims to advance wellness for musicians as well as the use of music in medical and therapeutic settings. Other initiatives include a singing project for dementia patients and a choral group for Parkinson’s patients.

The aim of Musicians on Call is to help student musicians develop flexibility and communications skills as performers while improving the quality of life for patients — and to boost the mood of health care providers, as well.

“This is a wonderful opportunity for musicians to forge an important part of their musical identity within the health care context,” says Sarah Hoover, associate dean for innovation, interdisciplinary partnerships and community initiatives at Peabody. “They get to see the value of their music, and it helps clarify why they’re doing what they’re doing — and why music matters.”

Hoover points out that Peabody is currently the only conservatory in the nation that requires all of its students to engage with the community as part of their musical education, thanks to the Conservatory’s Breakthrough Curriculum, launched last fall.

The idea for the Musicians on Call partnership came from former patient Melissa Grant. When her water broke early in her pregnancy, she was admitted to the hospital and stayed for two months — plus another month once her son was born. “For 91 days, I didn’t leave the hospital,” she says. “I received wonderful care, but it’s a tumultuous time.” 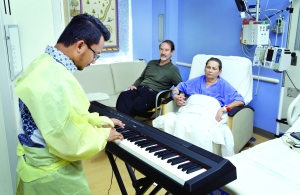 Feeling compelled to address the emotional needs of long-term patients, she joined the hospital’s Patient and Family Advisory Council. “You can be very grateful for the care you’re receiving, but at the same time you’re away from your home, your family, your work, and anxiety and depression can become prevalent,” she says. One of the offerings that she and Hoover came up with was Musicians on Call, to lift patients’ spirits.

Battles has been admitted to the hospital six times in 2018, facing complications after a kidney transplant. “I wish they gave frequent flyer miles,” she jokes.

But she’s grateful for the live music that she and her husband have been able to enjoy during her stays. At different points in her life she’s played trumpet, saxophone, and oboe, and she’s always loved music — so Tambuwun’s performances are one antidote to the frustration of spending so much time in the hospital.

“It means something,” says Battles. 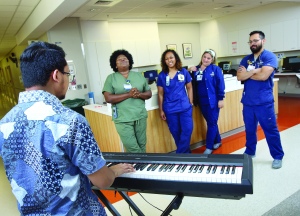 The nurses in the transplant unit say they’ve seen immediate benefits to patients resulting from the hospital-room concerts. Nurse clinician Dee Charoenpon says, “You see them light up. The religious patients especially like the hymns, and you’ll
find them singing along.”

“I think it brings them joy and soothes their anxiety,” says fellow nurse Miguel Briones.

“Some patients who are here for a long time start to get stir crazy. But the music helps with their anxiety,” notes Guy Chapman, the clinical customer service coordinator for the unit.

Tambuwun, who has also performed in the maternity inpatient unit, recalls a particularly moving performance there: One of the patients broke out in song, accompanying his keyboard performance by singing the lyrics to the opera aria, “O Mio Babbino Caro,” while a small crowd of other expectant mothers listened
and applauded.

Patients aren’t the only ones who benefit from the Musicians on Call program. The unit’s staff members also feel their spirits lift when they see Tambuwun and hear his music.

“When I see him coming, I just feel happy,” says Apolonia Chukwu, a technician on the transplant unit. “I love it. I want him to come all the time. Some days are really stressful, and this helps.”

Sometimes when Tambuwun plays hymns, Chukwu sings along, reciting lyrics by heart from songs such as “The Old Rugged Cross.”

Hymns are a natural go-to for Tambuwun, who “grew up in church” in Indonesia, where both his parents are pastors. He learned music by memory there, especially contemporary Christian music and hymns, and he earned his undergraduate degree in composition at Texas A&M. Before moving to Baltimore, he played piano in nursing homes in Texas and served as the music director at a non-denominational church in Philadelphia. At Peabody, he’s just begun his second year of a two-year MM degree.

Hoover says the pilot of Musicians on Call was so successful that the program will add more days this fall, with additional student musicians. Tambuwun is thrilled to continue working with the program.

“In this work with patients, I learn to read emotions and share what people want to hear,” says Tambuwun. “It’s a special kind of satisfaction.”