It’s a Wednesday night in Baltimore, and the LUNAR Ensemble’s musicians are tuning up to play works by composer Jason Eckardt in an unconventional setting intended to break down barriers between musicians and their audience.

No stage gets in the way. A semicircle of tables, spread with white paper and studded with crayons, surrounds the seating. This inspires free sketching, conversation, and Instagramming during breaks. You can grab a free beer on your way to your seat.

“The sort of stuffy rules of being an audience member are subdued,” says concertgoer Jason Farrell. “It’s nice to experience artists going out on a limb to create something offbeat, unique,” he says of the new music collective, which has premiered 40 works since 2011 (see sidebar). Based around the pierrot-plus instrumentation — flutes, clarinets, violin/viola, cello, piano, percussion, two sopranos, and conductor — the LUNAR Ensemble is offering a happy hour concert this evening, hosted by the Baltimore War Memorial Arts Initiative.

Mr. Farrell enjoyed his first trip to hear the LUNAR Ensemble so much that he returned for a second pour of beer and music, this time at An die Musik in Mount Vernon. “If I were to box the experience into a sentence, it would be, ‘avant garde classical you can bring your kids to,’” says Mr. Farrell, an aficionado of video game music and Led Zeppelin. In fact, during that performance, a 5-year-old boy cried out, “I like this!” during each work, while bouncing in his seat. He high-fived with the composer and met the soloists at intermission. North of Peabody, another group stakes out new turf for classical music, drawing a new audience. The Occasional Symphony’s concert in December traces the history of the waltz from Strauss to Schoenberg. The venue is Church & Company, a performance space in Baltimore’s Hampden neighborhood that was formerly a Presbyterian church. The occasion: a masquerade ball.

As we walk up the staircase, the sound of strings floats down to greet us. We choose a mask from the pile on the table. Candles surround us. A giant chandelier strung out with Christmas lights sets the tone. How on earth did they manage to fit a 21-piece orchestra, complete with concert harp, into the room? If my dance partner is not careful, I might get clipped on the hip by the cellist’s bow or fall into a violinist.

We take our place in the line of dancers, and the lesson begins. There are giggles, a few grand tumbles. Everyone is in character and radiant in the context. Midwaltz, an attendee, Matthew, proposes to Monica, his date and now fiancée. And the whirling continues, faster.

The exercise prepares us all for Schoenberg’s String Quartet No. 2. The second half of the concert starts with a show-and-tell on the development of the waltz. The orchestra strikes up a galliard, a minuet. Then, in groups of four couples, we make new friends by putting hands across to each other in a contra dance.

Part ringmaster, part dancing master, the Occasional Symphony’s executive director, James Young (DMA ’14, Composition), drinks it all in. “More than I expected, I feel I am at a ball. Back then. In Vienna.” He’s grinning as he talks to the assembled group. “This is our mission!” Learn, laugh, listen. It’s a concert none of us will ever forget.

These new ensembles and others like them are firing the local scene with a new vigor, making classical music an enduring partner in Baltimore’s burgeoning arts scene. With students and alumni leading the charge, Peabody has become a driving force in this proliferation of new music endeavors.

While Peabody musicians have long relied on nearby An die Musik as a popular performance space, today’s new student and alumni ensembles are striking out to unconventional venues across the city. Student performers have taken over spaces from the pizza joint Joe Squared on North Avenue to residencies at the Baltimore Theatre Project, a stone’s throw away from Joseph Meyerhoff Symphony Hall. They are mounting operas — rock and otherwise — at 2640 Space in Charles Village and screening films with live orchestra. They are “art bombing” Johns Hopkins Hospital and the War Memorial across from City Hall.

The secret recipe for all these ensembles can be found in this list of C’s: curation and concept, in context, in a continuum, with consistency — in short, a collaboration that is as consumable as possible.

“Putting on a good show means having your fingerprint on every part, not only musicianship: conceiving the show, building the audience, and presenting it in a personal way as no one else can,” says Peabody composer and faculty member Judah Adashi (MM ’02, DMA ’11, Composition).

Dr. Adashi should know, since his Evolution Contemporary Music Series, launched in 2005, could be considered the forerunner to many of today’s new music endeavors in Baltimore. The series aims to produce singular events for everyone —  composer, musicians, and audience — that make Baltimore a destination for new music. Over the past decade, the series — which regularly includes pre-concert talks with performers, composers, critics, and scholars — has presented or premiered works by more than 75 composers.

Among Evolution’s brightest interpreters, you’ll find Peabody musicians who have their own ensembles. For instance, Lauren Rausch (DMA ’14, Violin) regularly appears as a soloist for the series and is managing director of the new music ensemble SONAR.

Back in 2009, SONAR took over the George Peabody Library with a guerrilla concert to debut the piece “iPod Shuffle” to much laughter and applause. More recently, SONAR has been in residence at the Baltimore Theatre Project. Taking full advantage of lighting, projection, and actors from a local theater company, SONAR offers musical levity to the local arts scene. 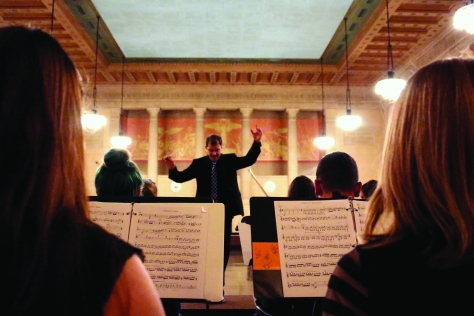 Mr. Sorgi, a deft violinist and comedian, is as apt to revive a John Cage piece as he is to commission something spanking new. “For me, every piece of music has a story to tell. Our aim with SONAR is to bring these stories to life by tying in other art forms as well. Amazing music is being written every day, all around the globe, and it’s our job to make sure these composers get a chance to be heard.”

In November, Peabody’s newest ensemble, Now Hear This, made its debut to a jampacked Griswold Hall, which buzzed with energy. When master’s student Christopher Salvito, also of Occasional Symphony, took a wordless sprint up the aisle and began the explosive percussion work Paddy, by composer Donnacha Dennehy, you knew this was not your typical Peabody recital. Voice faculty member Ah Young Hong (BM ’98, MM ’01, Voice) exclaimed it was “the most exciting concert of the year.”

Now Hear This, a contemporary chamber music ensemble, is something Peabody was missing. Envisioned as a flexibly configured group, it will provide a seamless link between student players and working composers. Students will develop intimate professional relationships with living contemporary composers.

Opportunities like these draw students to Peabody and keep them here once their formal studies are complete. Part of why they stay? Reaching audiences who may have felt shut out of the old conservatory environment. As Dr. Smooke puts it, “Courtney Orlando conceives Now Hear This concerts as curated theatrical experiences based around killer performances of energetic music — the sort of exciting events that might appeal to people more at home in Baltimore’s clubs and DIY scene than at a classical concert hall.” Baltimore is where it’s at, says today’s young talent, including Occasional Symphony’s James Young and Joshua Hong (MM ’15, Conducting). “I don’t want to leave,” says Mr. Hong. As a student, Mr. Young experienced mezzo-soprano Megan Ihnen’s (MM ’09, Voice) Federal Hill Parlor Series, which took over homes and art galleries throughout the neighborhood south of the harbor. And that, he says, “is what I wanted to do all the time.”

Perhaps most striking about today’s new music scene in Baltimore is how deeply interwoven the Peabody connections have become, and how they continue to grow. LUNAR Ensemble, for example, formed inside Peabody but reached outside it to celebrate the centenary of Arnold Schoenberg’s Pierrot Lunaire. Back in 1912 Berlin, Mr. Schoenberg’s vocal work incited hissing, hysteria, and laughter. When LUNAR played the work in Johns Hopkins’ Shriver Hall, Baltimore was eager for it. As part of the centenary project, eight young composers affiliated with Peabody were invited to set to music the remaining Pierrot Lunaire poems by Albert Giraud — a continuum of Sprechstimme. Their eight original compositions were performed at Shriver Hall alongside Mr. Schoenberg’s melodrama.

One of the participating composers was Joshua Bornfield (DMA ’13, Composition; MM ’14, Music Theory Pedagogy), who today still reaps the fruits of that early collaboration, as he has engaged LUNAR as the current ensemble-in-residence for his War Memorial Arts Initiative. With WMAI, Dr. Bornfield seeks to activate the space of a forgotten yet remarkable Baltimore landmark — an imposing neoclassical building with an expansive auditorium across from City Hall. His main means? New music.

So far, Dr. Bornfield’s WMAI has featured 55 composers, 40 of whom are living and several from the 16th century and before.

When LUNAR’s flutist and Chamber Music Director Stephanie Ray (MM ’12, Flute) experienced her first War Memorial show, she approached Dr. Bornfield with one question: “How can we be a part of this?”

Together, they planned LUNAR’s residency at WMAI, drawing inspiration from Rafaela Dreisin (MM ’10, Trumpet), with whom Ms. Ray co-founded the local chapter of Classical Music Revolution, a loose collection of improv ensembles that performs at bars, bun shops, and pizza joints.

Ms. Ray, a self-described “activist for new music,” sees Baltimore as a place of infinite possibility. Her ultimate dream is to start her own hub of art that channels the energy of all she loves about Baltimore, with music-making that impacts society. She’s eager to draft her cohorts, like Occasional Symphony, for the cause.

Though started by Peabody students and alumni, today’s new ensembles now offer a life — and living — beyond Peabody’s concert halls. Their strength consists in being artist-driven, creative families. Gemma New (MM ’11, Conducting), LUNAR’s conductor, stresses that all her players have a say in the group’s artistic direction. They all want to be performing the most influential music out there right now. They aim to be the next Kronos Quartet, ICE, or Alarm Will Sound.

Peabody’s students are in luck, with Alarm Will Sound and Ensemble Signal founder Courtney Orlando marching alongside them. “As someone who dedicates my life to the creation and performance of contemporary music, I am beyond thrilled about the direction in which Peabody and its alums are moving,” she says. “I am very grateful to count myself among the leaders of this movement and look forward to watching it grow. I can only imagine the excitement will be infectious and will build new audiences inside and outside our walls.”

She adds, “I would be lying if I said I don’t have a few things up my own sleeve to try out on some unsuspecting concertgoers.” 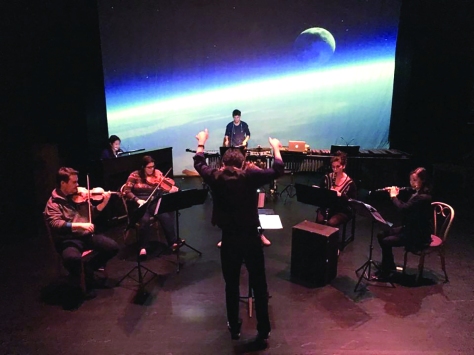