Augmenting a collection rich with musical scores and historical treasures, leaders of the Friedheim Library are taking a giant leap into the 21st century with innovative programming, more digital collections, and state-of-the-art equipment.

At a glance, Peabody’s Arthur Friedheim Library could be any library. A familiar-looking circulation desk sits on the left side of the lobby, opposite a 20-foot arched window that looks out onto a courtyard. In the middle of the room, students hunch over books at wooden tables, jotting down notes. The building’s 1980s architecture and simple décor make the space feel more traditional than modern — but first impressions can be deceiving.

Over the last three years, the leadership of this 30-year-old music library has been working behind the scenes to propel it into the 21st century with innovative programming, more digital collections, and state-of-the-art equipment. Friedheim’s new technology, coupled with an expertly curated selection of musical scores, have turned it into an essential resource for Peabody Conservatory students.

“A library used to be a place that collected scarce resources,” says head librarian Kathleen DeLaurenti. “Our role as librarians now is to help our students and our scholars understand what to do with way too much information, and how to process that to make something meaningful.”

Beyond the circulation desk, visitors will find Apple computers outfitted with piano-style MIDI keyboards and the latest software for music notation, sound design, and video editing. Another room boasts a powerful virtual reality workstation acquired to help students in the Music for New Media program research 360-degree sound environments for video games. The library is also home to a full-service audio and video production shop where students can check out amplifiers, electronic pianos, microphones, recording equipment and HD video cameras.

“The access we have to just about everything we would ever need is really incredible,” says Nathaniel Parks, a master’s composition student. “Having a recorder that I can check out and use has been life-changing. I started a music ensemble, and I use it for all the rehearsals.”

The library’s new offerings have attracted more visitors as well. Between 2016 and 2018, foot traffic increased by 12%, and score and book circulation was up 27%. That amounts to more than 80,000 visits per year, for a campus of only 700 people.

“We are uniquely positioned here to be really responsive to the campus community. Because we’re funded directly through the Institute, we can work closely with administration to launch exciting initiatives that align with the curriculum,” explains DeLaurenti, who joined Peabody in 2017.

Earlier this year, DeLaurenti had the opportunity to orchestrate the educational event of her dreams: a music hackathon. The term “hackathon” typically refers to a collaborative computer programming session held over multiple days, but she had a different vision in mind.

With the help of a $36,000 Johns Hopkins DELTA (Digital Education and Learning Technology Acceleration) grant, Peabody invited students from across the university to spend 24 hours in Friedheim Library attempting to create new instruments and teaching tools for musicians. The competition, which kicked off on February 1, offered a first place prize of $2,000 to the winning team.

Katheleen DeLaurenti is the head librarian for the Arthur Friedheim Library

“I wanted to promote the library as a space for learning and collaboration, and also create an opportunity for music students and students from computer science, the School of Medicine, and Public Health — anywhere in Hopkins — to come into Peabody and collaborate alongside each other and see what kinds of things they could learn,” says DeLaurenti, who is also a trained opera singer. “What happens when you put them all in a blender?”

At 4:00 pm on a Friday, more than two dozen students arrived to compete in the hackathon. For the next 24 hours they cobbled together a total of eight projects using do-it-yourself electronics kits, sensors, circuit boards, and a mishmash of assorted objects.

Junior voice student Mofan Lai initially wanted to observe the hackathon without competing, but when he saw all the tools provided by the library, he thought, “I can do this.” He teamed up with master’s voice student Cierra Byrd, and the pair used a basic circuitry kit, called a Makey Makey, to turn the library stairwell into a musical instrument, with each step playing a different note.

“People are afraid because they don’t know anything about computer music … but all Peabody majors should have the confidence to attend,” says Lai, who won first place alongside Byrd in the build-your-own instrument category.

A group of students from the Whiting School of Engineering and Krieger School of Arts and Sciences took home the top prize for a wearable device that can teach a prosthetic hand to play an instrument using brain signals. Their prototype was pieced together using a Redbull can, sensors, electrodes, and a ukulele.

Sophomores Kaden Culp, violin, and Daphne Bickley, viola, shared third place for a device that helps string players develop muscle memory for good bow position. Their invention attaches to the bow of a cello or violin and tracks its movement using an internal accelerometer and gyroscope. The pair is planning to file a patent for their design this year.

“It was an excuse to get back into programming for 24 hours,” says Culp, who used to do computer programming in high school and middle school. “I was really happy with how it all turned out.”

Culp toiled through the night perfecting his project, only leaving the library once for a 30-minute nap. DeLaurenti also spent the entire night in the library, sleeping briefly on a beanbag chair in her office.

“Kathleen is amazing for setting up this whole hackathon thing and all the initiatives in the library over the last year. She very clearly wants to make this school better,” says Culp.

Friedheim’s embrace of all things digital hasn’t stopped it from expanding its assortment of historical treasures. Named after the Russian-born pianist and composer Arthur Friedheim (1859–1932), the library opened in 1990 as the Conservatory’s main library with the help of a $2 million donation by Friedheim’s son. Since then, it has amassed an impressive permanent collection.

In the upstairs Collections Room, more than 5,000 linear feet of shelving are filled with decades-old concert programs, archival photos of local musicians, delicate reel-to-reel tapes of Peabody recitals, and other memorabilia. A rare books room houses some of the most precious items in the library, such as an original manuscript score handwritten by Beethoven in 1826 and a letter penned by German composer Felix Mendelssohn to his publisher in 1837. One of the most interesting items in the room comes from Friedheim’s own personal collection: two locks of hair that likely belonged to the prolific Hungarian composer Franz Liszt, who was Friedheim’s music teacher in the 1880s. 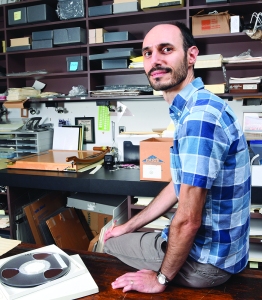 Matthew Testa is the library archivist at the Friedheim Library

“We found this in Arthur Friedheim’s archival papers, amid other Liszt things,” says library archivist Matthew Testa, conceding that a DNA analysis would be needed to confirm the source of the dark blond wisps. “I often show it when there are class visits, because it usually blows their minds.”

Thanks to a number of recent donations, the library’s collections are continuing to grow. In 2015, private donors gifted items once belonging to the glamorous opera star Rosa Ponselle (1897-1981), who served as the first artistic director of the Baltimore Opera Company. The collection, some of which is on exhibit at the library through December, includes paintings, porcelain figurines, furniture, dresses, sheet music, performance programs, and photographs.

Last year the school received approximately 150 unpublished works by Walter Spencer Huffman (1921–2005), a composer and Peabody faculty member in the 1940s and 1950s. The scores were donated by his widow and include chamber, symphony, and choral music.

“It’s a rich collection that some students have dug into to find pieces to work with,” says Testa.

Friedheim also acquired materials from composer David Simon (1925–2017), who founded the Baltimore School for the Arts, and Grammy-nominated soprano Phyllis Bryn-Julson, who taught at Peabody from 1984 to 2017. Singer Marni Nixon (1930-2016) and her heirs have given multiple donations to the library, including scores, concert programs, clippings, photographs, and recordings. She was well known for her work as a “ghost singer” in the 1950s and 1960s, performing the singing parts in The King and I, West Side Story, and My Fair Lady. In 2012, the institute awarded her the George Peabody Medal for her contributions to American music.

The library started digitizing many of its holdings around 2012, but with more than 200 special collections in its archives, the process has been slow going. In the meantime, Testa is working on a number of projects to improve access to electronic resources, such as a 50-year digital log of the Baltimore Symphony Orchestra’s performance history. Friedheim is also collaborating with the Information Technology staff and the Recording Arts and Sciences Department on a system to provide on-demand streaming access to video and audio recordings of Peabody performances. If all goes smoothly, the new platform is expected to launch during this academic year.

“Some students were just hiring private videographers or streaming things on Facebook Live. If we can offer a more consistent, easy alternative that meets our needs … then that’s ideal,” he says.

DeLaurenti says that Friedheim’s cataloging and collection librarian, Kirk-Evan Billet, inspired her to think of the library’s collection as a living organism with materials that are constantly responding to one another, where the same piece of music may exist as a written score, digital recording, or even a 360-degree performance inside a virtual reality headset.

“I feel like we’re just extending that into the logical next step for the 21st century.”