By attracting a steady stream of influential thinkers and artists, the Dean’s Symposium series is immersing students and faculty members in the national conversation about the future of classical music.

Music criticism can illuminate, explicate, and, yes, even castigate the work of performing musicians and composers. But Pulitzer Prize-winning critic Tim Page thinks of his work as “an autobiography of the heart.” 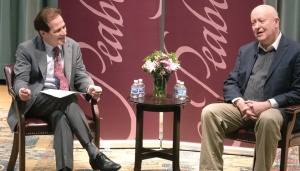 Page, who offered his reflections with Dean Fred Bronstein at a recent symposium held at Peabody, is a preeminent writer who has championed new works since beginning his career in the late 1970s in New York City. “I’ve had a chance to write about one of the arts I love profoundly,” he says, “and I’ve managed to speak my piece, and I’ve made mistakes.”

The number of full-time professional critics in the United States has plummeted, but Page says that doesn’t mean that the discussion about music is vanishing. “The internet has allowed people to be their own critics,” he observed. New websites of varying degrees of professionalism and focus allow observers “to weigh in on performances and start a real dialogue.”

Page, who taught a class on writing about music for several years at Peabody, says professional criticism may not rebound, but “the dialogue will go on, much more intimate and much more thoughtful than … when there was one big newspaper and one critic and that critic’s word was considered the final word on something. It’s never the final word, and any honest critic will admit that.”

Page is the latest cultural luminary to appear in an ongoing series of dialogues hosted by Bronstein at Peabody. Previous symposia have allowed students and faculty a chance to hear from some of the most influential figures in classical music, including pianist and composer Steven Hough, flautist Claire Chase, and acclaimed director of operas Peter Sellars.

Yet the symposia are not only focused on performance. The Peabody community has also gleaned insights about the tricky currents of the music business and administration from leaders including Kennedy Center for the Performing Arts president Deborah Rutter, The New Yorker’s music writer Alex Ross, and pioneering arts administrator Aaron Dworkin, a Peabody Preparatory alumnus who founded the Sphinx Organization.

“As the oldest conservatory in the United States, and as part of one of the world’s premier research universities, I believe Peabody has an obligation to lead the important national conversation about the future of classical music, dance, and the performing arts generally,” notes Bronstein. “We owe it to our students and to the art we all love to explore the challenges and opportunities we face in an ongoing, open, and thoughtful dialogue. The level of the conversations we’ve hosted has been very high, and I’m pleased that such leaders in our field have agreed to share their insights through these symposiums.”

Zane Forshee (MM ’01, GPD ’03, DMA ’11, Guitar), director of LAUNCHPad and a faculty member in the Guitar Department, observes that Bronstein’s symposia have introduced a new element into the dialogue at Peabody.

“We didn’t have access to these sorts of speakers when I was a student,” he says. “The chance to ask them: ‘How did you think of this?’ The chance to have them listen to you.”

Forshee adds that the talks also show the human side of success in music. “You see that these are people — people who have developed to the highest level, but who have also had the same struggles that I have.”

Master’s voice candidate Hannah Noyes sees the symposia as “a wonderful way for us, the future of American music, to observe how successful musicians have built their careers. Feedback like this is so important as we young musicians break into the industry.”

Page was diagnosed with the autism spectrum disorder known for many years as Asperger’s syndrome when he was in his mid-40s.

Jamison asked Page about the links between autism and creativity in his own work. “I am convinced my autism has been responsible for many of the ‘good things’ I’ve done in my life, as well as the really painful and awful things.” Looking back on negative reviews written early in his career, he added, “I notice a certain autistic tantrum going on. And I’m ashamed of it.”

In the symposium, Page described his friendship with the mercurial Gould, which began when the critic interviewed the reclusive pianist for the Soho News in 1980. “It was supposed to be a half hour interview,” he recalled. “It ended up being four hours.”

He adds that autism might have helped spark a connection that saw two men talking for hours through the rest of their friendship. “I’m convinced that Glenn and I understood each other … because we both had a touch of autism,” Page continued. “He was very childlike. He presented this austere Master of the North image, but he was really like a brilliant 10- or 11-year-old.”

The question of how younger artists can forge a career amid the profound shifts in culture and commerce over recent decades is a central thread in the Dean’s Symposium dialogues.

Flautist and arts entrepreneur Claire Chase offered her audience reflections on the self-reliance and self-determination she found in the words of composer Hildegard of Bingen: “We cannot live in a world that is not our own, in a world that is interpreted for us by others. An interpreted world is not a home.”

“We are responsible for creating our world,” Chase elaborated. “If we go into a world that has been interpreted for us by the academy, by the corporate world, by our teachers, and even by our mentors, that’s not our world. Our world is the one we are creating and reinventing, and that we are responsible for.”

Eric Booth, author of The Music Teaching Artist’s Bible, argued that the answer was in finding joyfulness in the journey. One piece of advice he had for his Peabody audience was directed as much at faculty members who elevate competitive excellence over every other element of music education.

“The etymology of the word ‘compete’ is not to ‘strive against,’ even though it’s interpreted that way in our culture. It is to ‘strive with,’” he noted. “The word came from the original Olympic ideal, which was, you hold a running race because everyone ran faster within the context of a race. Everyone ups their game in a competitive environment, rather than seeking to win.”

His recipe for success? “You find a place that will let you play your music. You tell people about it. You use social media. You do cool things. This is Baltimore. All over Baltimore there are fantastic spaces where you can go and do something really interesting. You can make your own recordings. You can get them online,” he said. “Just be entrepreneurs … Be the aural equivalent of visionaries. Just go out and do it.”

For contemporary artists, Page urged that necessity is the mother of reinvention: “You have to remake the music business.”